The online and offline Chinese handwriting databases, CASIA-OLHWDB and CASIA-HWDB, were built by the National Laboratory of Pattern Recognition (NLPR), Institute of Automation of Chinese Academy of Sciences (CASIA). The handwritten samples were produced by 1,020 writers using Anoto pen on papers, such that both online and offline data were obtained. The samples include both isolated characters and handwritten texts (continuous scripts). We collected data from writers from 2007 to 2010, and completed the segmentation and annotation in 2010. The databases include six datasets of online data and six datasets of offline data, in each case, three for isolated characters (DB1.0–1.2) and three for handwritten texts (DB2.0–2.2). In either online or offline case, the datasets of isolated characters contain about 3.9 million samples of 7,356 classes (7,185 Chinese characters and 171 symbols), and the datasets of handwritten texts contain about 5,090 pages and 1.35 million character samples. All the data has been segmented and annotated at character level, and each dataset is partitioned into standard training and test subsets.

For our handwriting data collection, we compiled a character set based on the standard sets GB2312-80 and Modern Chinese Character List of Common Use (Common Set in brief). The GB2312-80 contains 6,763 Chinese characters, including 3,755 in level-1 set and 3,008 in level-2 set. The Common Set contains 7,000 Chinese characters. We collected the union of the two sets, containing 7,170 characters, for possible recognition of practical documents. We further added 15 Chinese characters that we met in our experience. We also collected a set of 171 symbols, including 52 English letters, 10 digits, and some frequently used punctuation marks, mathematics and physical symbols. The total number of character classes is thus 7,356.
For collecting handwritten texts, we asked each writer to hand-copy five texts. We compiled three sets of texts (referred to as versions V1–V3), mostly downloaded from news Web pages except there are five texts of ancient Chinese poems in both V1 and V2. Each set contains 50 texts, each containing 150–370 characters. The three sets were used in different stages of handwriting data collection. The texts in each set were further divided into 10 subsets (referred to as templates T1–T10), each containing five texts to be written by one writer. 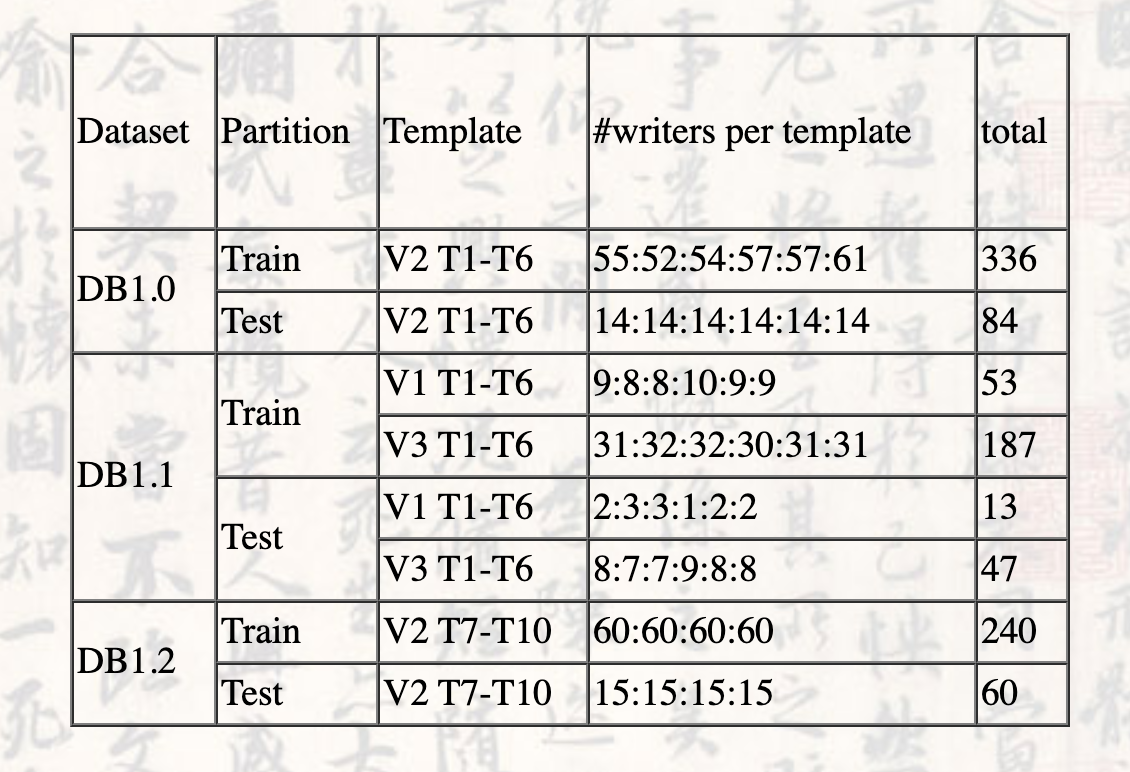 To enable the evaluation of machine learning and classification algorithms on standard feature data, we provide the feature data of offline handwriting datasets HWDB1.0 and HWDB1.1, online handwriting datasets OLHWDB1.0 and OLHWDB1.1. The samples fall in 3,755 classes of Chinese characters in GB2312-80 level-1 set. The datasets HWDB1.1 and OLHWDB1.1 (300 writers) are proposed to be used for preliminary experiments of Chinese character recognition of standard category set. The datasets HWDB1.0 and OLHWDB1.0 (420 writers) can be added to HWDB1.1 and OLHWDB1.1 for enlarging the training set size.
The feature extraction methods are specified in the reference below, and the results reported there can be used for fair comparison:
C.-L. Liu, F. Yin, D.-H. Wang, Q.-F. Wang, Online and Offline Handwritten Chinese Character Recognition: Benchmarking on New Databases, Pattern Recognition, 46(1): 155-162, 2013.
For offline characters, the feature extracted is the 8-direction histogram of normalization-cooperated gradient feature (NCGF), combined with pseudo 2D normalization method line density projection interpolation. The resulting feature is 512D.
For online characters, the feature extracted is the 8-direction histogram of original trajectory direction combined with pseudo 2D bi-moment normalization. The resulting feature is 512D.
The feature data of each dataset is partitioned into two subsets for training and testing, respectively. The numbers of writers and samples of the files are shown in the Table below.

The format of the feature data files is described below

We provide the isolated character datasets HWDB1.0-1.2 (offline) and OLHWDB1.0-1.2 (online) for study of isolated character recognition and the pre-training of classifier for text line recognition. Each dataset is partitioned into a standard training set and a test set of disjoint writers. The format descriptions of offline characters (.gnt) and online characters (.pot) can be found at the bottom, respectively.

Based on the CASIA-HWDB and CASIA-OLHWDB databases, we organized Chinese Handwriting Recognition competitions in 2010, 2011 and 2013. Now, we open the test data of competition for research. There are four datasets generated by 60 writers: offline character data, online character data, offline text data, online text data. The data format specifications can be found below. 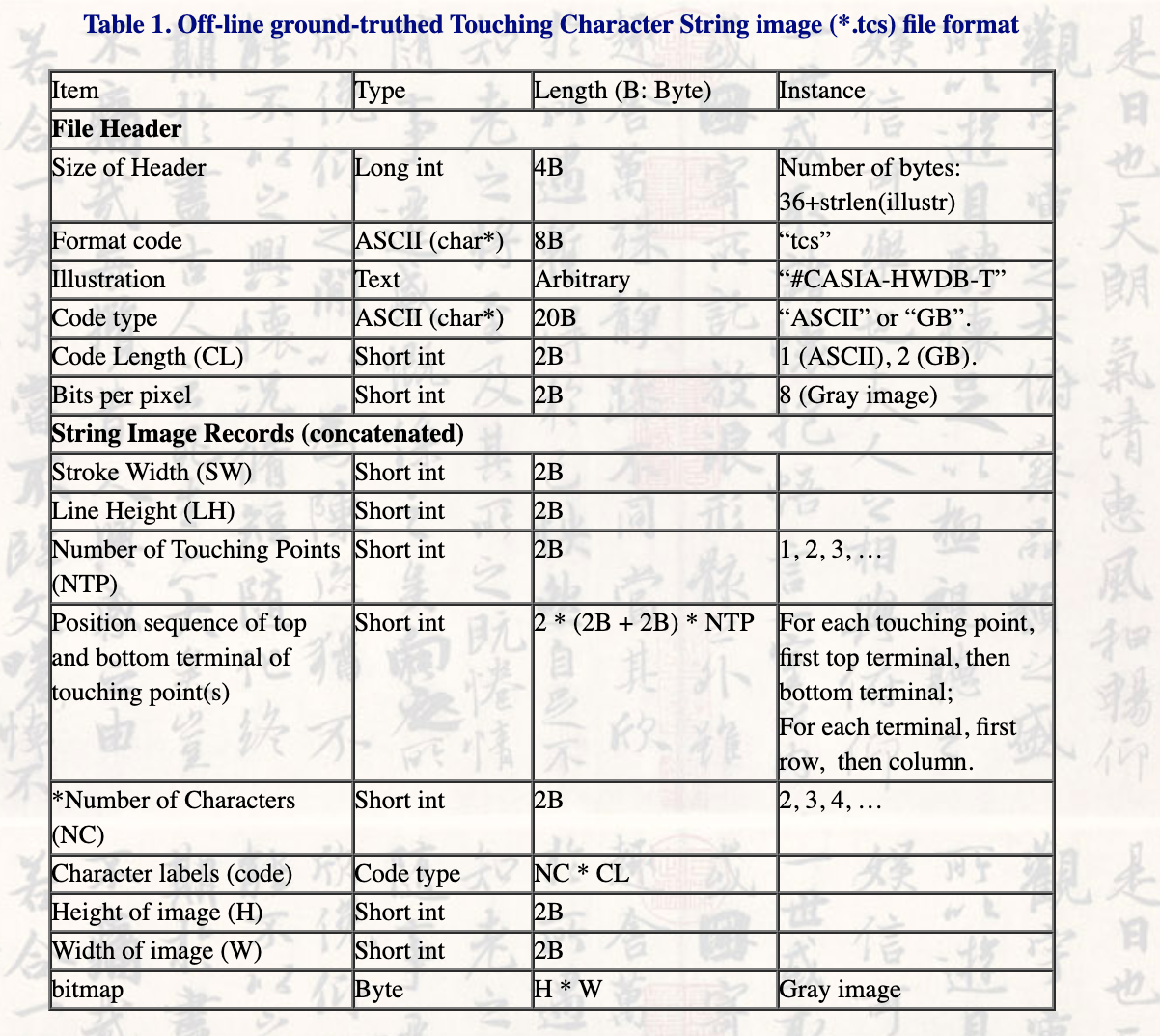 There are three datasets of isolated characters in the offline handwriting database. The statistics of these datasets are shown in Table 1. The datasets include 1,020 files, and each file (.gnt) stores concatenated gray-scale character images of one writer. The file format of (.gnt) is specified in Table 2. 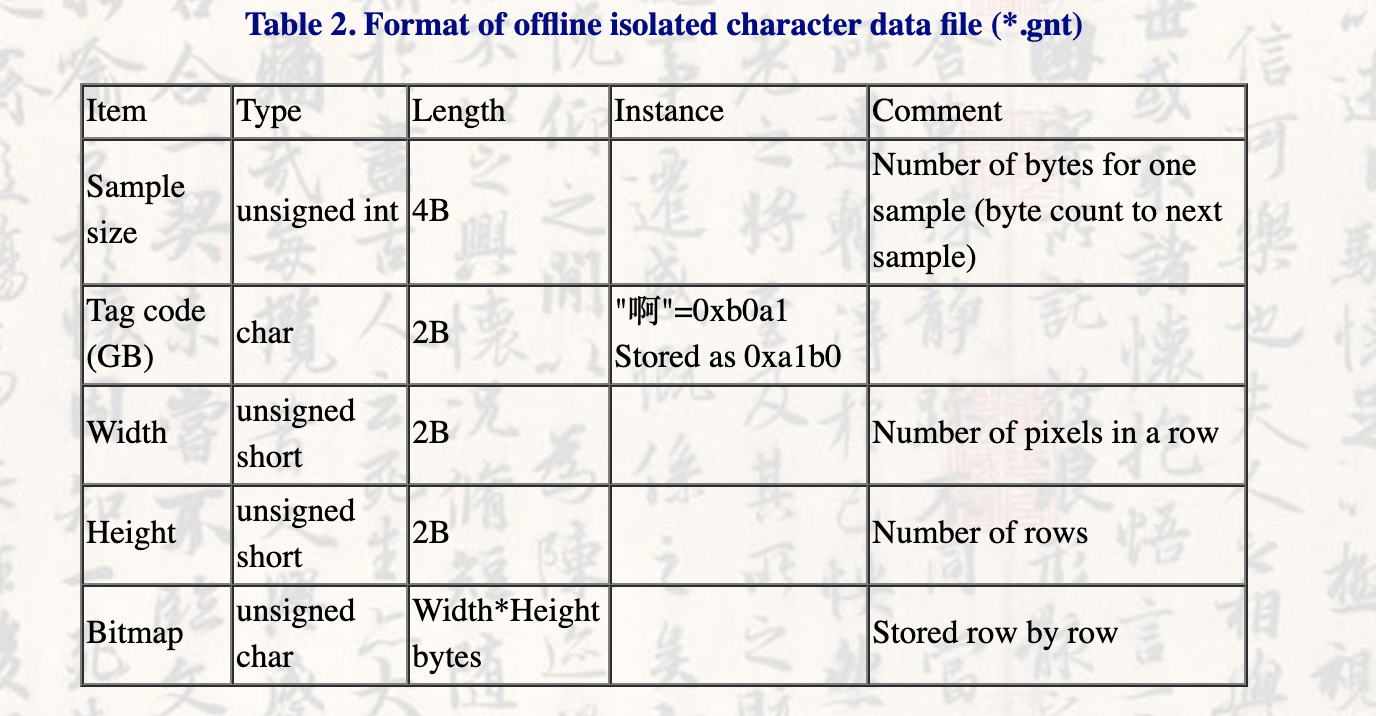 The offline text databases were produced by the same writers of the isolated character datasets. Each person wrote five pages of given texts. One writer (no.371) and four pages are missing because of data loss. Each page is stored in a .dgrl file named after the writer index and page number. In addition to the gray-scale image, the data file also includes ground-truths of text line segmentation and character class labels (in GB codes). The statistics of the datasets and the format of (. dgrl) file are shown in Table 3 and Table 4, respectively.

A DGRL (.dgrl) file stores a page of document image. The image has background eliminated (encoded as 255) and foreground (text strokes) encoded in gray level 0-254, one byte per pixel. Each page is stored as a series of lines. Each line has a header denoting the number of characters, sequence of character codes (GBK), top-left position, line height and width, then the block of bitmap (heightwidth bytes).
For concatenating the lines into page image, it should be noted that different lines may have overlap of plane, because the text strokes of different lines may overlap in vertical axis. So, for restoring the page image, the foreground pixels of different lines should be combined.

There are three datasets of isolated characters in the online database. The statistics of these datasets are shown in Table 1. The datasets include 1020 files, and each file (.pot) stores character samples written by one person. The file format of (.pot) is specified in Table 2. 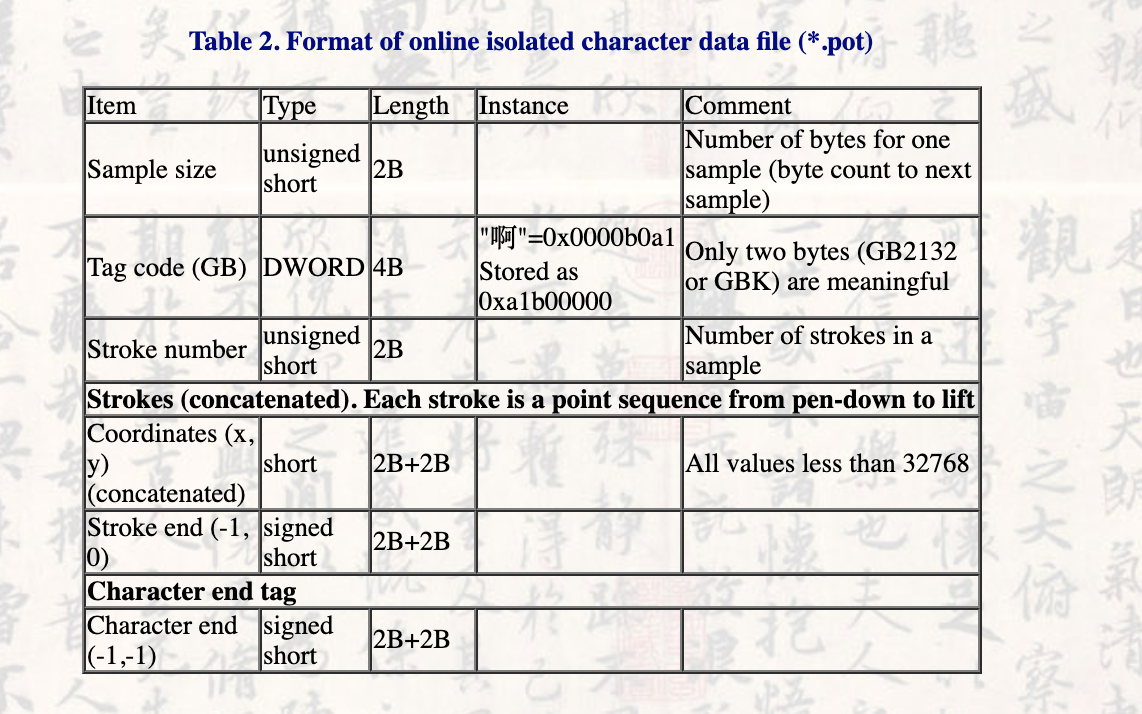 The online handwritten text datasets were produced by the same writers of the isolated character datasets. Each person wrote five pages of given texts. One writer (no.671) and three pages (2 pages of no.328 and 1 page of no.685) are missing because of data loss. Each page is stored in a . wptt file named after the writer index and page number. In addition to the stroke trajectory data of the page, the data file also includes ground-truths of text line segmentation and character class labels (text line transcript in GB codes). The statistics of the datasets and the format of (.wptt) file are shown in Table 3 and Table 4, respectively. 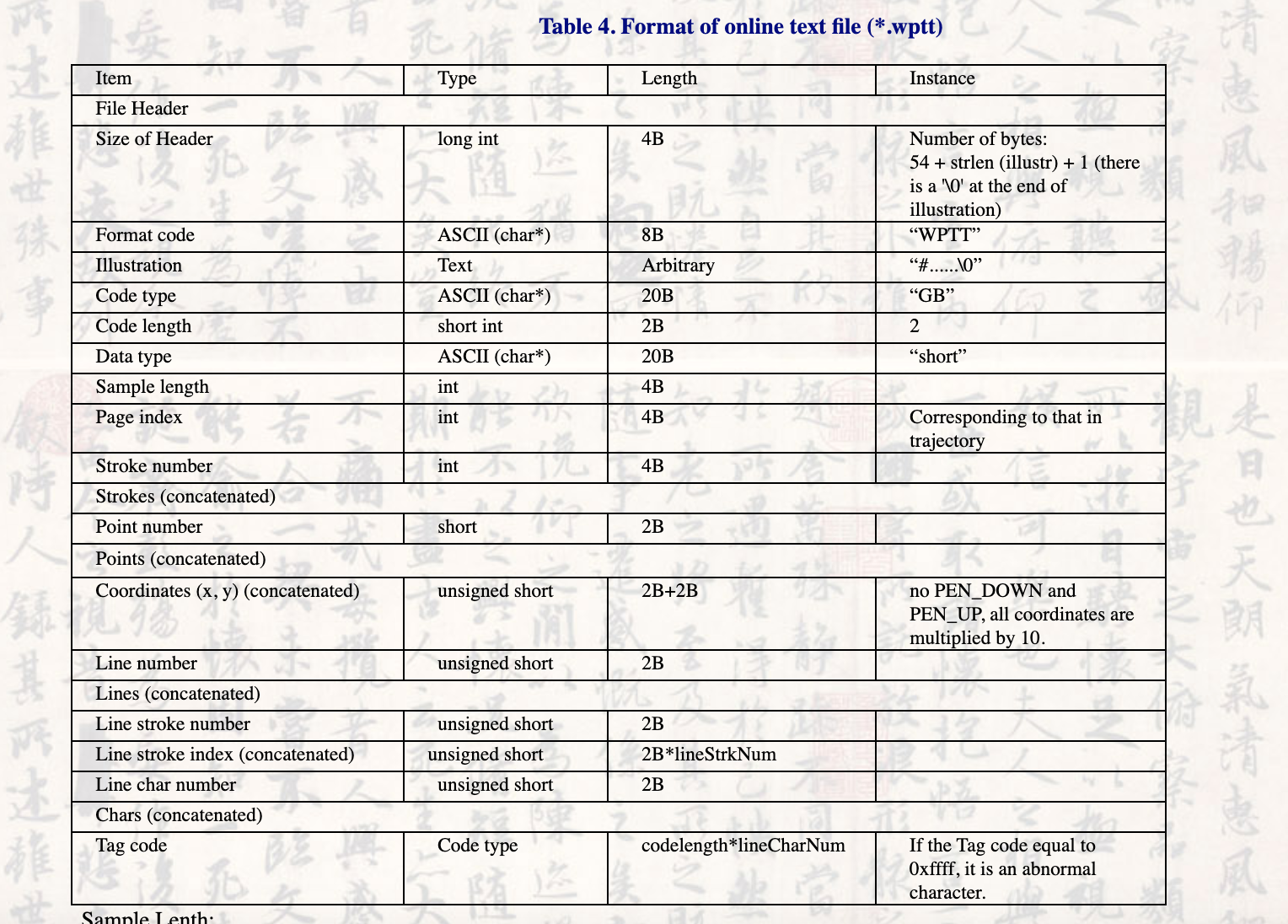